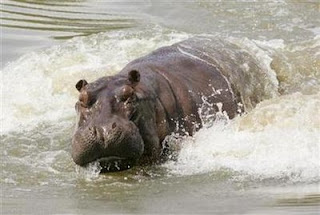 The two-ton female called Nikica broke out of her cage and swam away after seasonal floods hit the zoo just outside the Montenegrin capital Podgorica, zoo manager Davor Mujovic said.

"She remains at large, but one of the guards is keeping an eye on her and is feeding her daily," he said.

The hippo found a dry spot a mile away from the zoo as shelter from cold flood waters. Mujovic said zoo guards would have to wait until the water recedes to try to lure the animal back to its enclosure with food.

In its native Africa, the world's third largest mammal on land is considered aggressive and dangerous. But zoo owner Nikola Pejovic said Nikica was not a threat to people.

"People like her, and she is used to people, villagers are bringing her fresh hay," he said. - Reuters